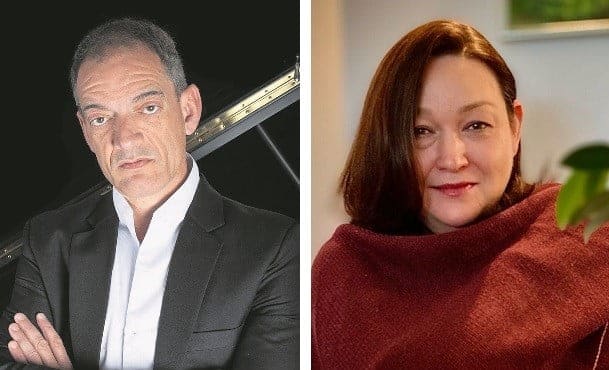 Francois and Farida will open the Russian two days of FynArts with a programme that includes Tchaikovsky, Prokofiev and Stravinsky. In 1992, Farida, then the youngest female concertmaster in Russia, was the soloist for more than forty performances of ballets such as The Nutcrackerand Swan Lakein Tokyo’s Metropolitan Hall. She has appeared as a soloist for ballets and as a symphonic soloist in many of the world’s major halls. Francois, an acclaimed concerto soloist, is acknowledged as one of South Africa’s finest pianists, chamber musicians and music educators.

Vaslav is a choreography of dialogue, music and movement that draws on the works of Stravinsky, Rachmaninov and Tchaikovsky. The show has earned Godfrey nominations for the Fleur du Cap Best Actor in a Musical, Best Performance in a One Person Show, and Best Composer. Vaslav draws from the diaries of Vaslav Njinsky, the elusive icon of both Imperial Russian ballet and the Western avant-garde. These diaries were kept over the six weeks during his six weeks of treatment in a mental asylum.

Magdalena was inspired to continue her studies in Japan by Keiko Abe, one of the pioneers in promoting the marimba to become a solo instrument. Developing her skills as an all-round percussionist, Magdalena furthered her studies with an ‘all-round’ teacher, Professor Atsushi Sugahara who inspired several composers to write music for him.  Madgalena will perform at some of Keiko’s compositions during her performance.

This performance will include an introduction to the sitar and the tabla , The programme includes a classical sitar performance which develops into varying speeds and styles, accompanied by the tabla, followed with a few light folk compositions. Akash Srikewal has played the sitar for over 25 years and established a style of performing classical, semi-classical and modern music that is soothing and soulful. Ronan Skillen’s musical genres include classical, rock and folk, electro, jazz and hip-hop. He has performed internationally and featured on many recordings and film scores – including the Oscar-winning documentary, My Octopus Teacher.

Taare is an Indian dance troupe based in Cape Town that promotes the Indian arts through the creative use of Bollywood song and dance. Founded in 2012 by artistic director, Ahneesh Valodia, Taare provides a professional platform for aspiring dancers to pursue their passion while contributing to the enrichment of the greater community through dance. These performances will include a brief history of Indian dance, a demonstration and a fun “workshop”.

Please note that the performance, St Petersburg (1703 – 1917), by Edward Saunders, is already fully booked. If you would like to be added to the waiting list for this or any other event, please reply to this newsletter or contact Chantel on 060 957 5371 or admin@hermanusfynarts.co.za.